That Time of the Year Once Again 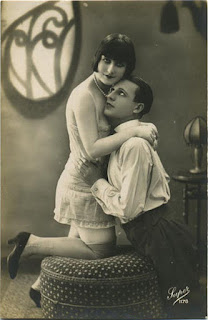 February always is the hardest on me. I can withstand "Hell Months" because for our sixth year now,  I am used to the ups, the downs and most of the curve balls. Sometimes he throws me for a loop but I can recover pretty well. Valentine's Day I always thought was overrated and for the first time, my husband did something small for me which was monumental. On the 25th though, is our Wedding Anniversary. Every year since he has been home, he has ruined it to the point where I dread when the date rolls around. After my trip away, six days of just being me and coming home, I thought this year would be much different.

I thought perhaps he might have missed me just a little bit.

Hopeful, I longed to hear "I really missed you".

Instead, I got "I missed ya. There was no one here to bitch at me".

I always seem to be so colorfully described in my treatment towards him. Seems sort of unfair really when its really the opposite.  Sometimes I wonder if I am truly this ugly image that he sees in his head?

I have tried to explain that really doesn't say a whole lot and while joking, it seems that's the only way he can show any type of emotion is through joking. To me, its like saying "I love you but I hate you". "I like your hair cut but you look like something that got dragged out of the swamp". No matter what the nice thing is, it gets followed by something negative. It doesn't mean you told that person you loved them or am I just totally missing the boat on this?

It's been a fight since the 15th of this month and for ten days, it just seems everything was either my fault or not good enough. A small part of me just wants to say **** it, who cares about a stinking Anniversary anyway? The other part, the small and pathetic romantic in me, just wanted to see some sparks. After enduring these ten days, it seems that he would just find things to be mad at me about and I am not sure why. It is this way every single year. Always a week before, and usually a week after. I think in the week before I left, he said maybe four full sentences to me in an entire week. Then people wonder why I am starved for adult conversation.

I never ask for anything more than just his attention. It is what I crave more than anything in the world.

For some reason, that attention is focused on his smart phone, his particular TV shows, his buddies, the weather, or anything else that has nothing to do with me. The part that hurts the worst out of all of it, is the fact he thinks I am in the wrong for wanting to have that attention. Wrong, for wanting to celebrate another year married. This leaves me confused, not understanding the reason why I am being punished for something I haven't done. Sensible me, trying to remember that perhaps its military related that is the root of all this...there is nothing in February that we can pinpoint it to. It hurt to have messages from friends or my sister wishing me Happy Anniversary, and the one person I needed to hear it from, went to his class and never bothered to say a word.

I spent my wedding anniversary alone. I worked to keep from crying. I attacked my poor carpet in my home, steam torture style, with my Bissell cleaner. I dusted behind those nooks and crannies. I thought maybe I could turn the music up, sweat away any tears that might rise up and sit behind my eyes but it didn't happen that way. All I did was end up a crying mess and taking it out on the carpet. It is really clean though so at least that's one positive. I didn't even get a "hey, the carpet looks really nice!" which further ticked me off.

Seems too, when you are most down, not needing to cry, your favorite song comes on or one of those really sappy, mushy love songs about how much you need that person. I really would like to hunt down the DJ who was working yesterday as I was forced to turn off the Ipod, turn the radio on and dammit all, if he wasn't in on the game!

I give it all, am always here and I just can't seem to grasp why the concept of being there for your spouse is so hard. I sometimes envy other spouses who tell these wonderful stories about the latest, even if small, nice thing their wounded Veteran did for them. I know....we can't compare, one size doesn't fit all...I get it. Doesn't mean I don't want the same treatment though. I know most of us deal with no acknowledgement of Mother's Day, Birthdays, Anniversaries, or the likes. You would think by now, we would be used to it wouldn't you? Someone on my Facebook page mentioned that the point was that we made it another year and we were still married. Yes, that's true but, it doesn't mean having your husband walk away from you with no care in the world or doesn't even care how broken your heart is.

I didn't want flowers, jewelry, or anything more than just perhaps spend a little time with me. I think out of all the curve balls and the down sides of PTSD and TBI, this part I will never get used to.

On a more positive note, as I was talking with my good friend Warrior Chef today, I realized I bypassed my blog anniversary in January. Hard to believe it's been four years! Wow!  It's so funny because I look back from time to time and see how much I have grown, things I have gotten past or made it through, what I survived and what failures/mistakes I made. More importantly, how many people, friends, organizations and much much more that came from this one little tiny blog of me just telling what it's like to live this way. Would have never thought four years ago, that I would end up here but I am proud of this accomplishment.

Yesterday has passed, tomorrow will come again and all will eventually smooth out as it normally does. I keep reminding myself "thicker skin. Thicker skin." but it never really helps. That's just the softhearted person I am I suppose. If anyone knows where I might find that armored thicker skin, let me know will you?