One Size Doesn't Fit All 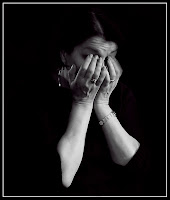 It wasn't a good weekend. At all. Monday has come bringing on some depression within me, some anger, and well....just sadness. Since my husband has been home from the PTSD Rehab program, we haven't really gotten into a structured routine at all. I had hopes, he had hopes; we both came up with a mutual "plan" to fight back. It hasn't worked so far, mostly based on lack of interest on his part and he is still running away every chance he can to avoid the family. Some days I think its better because at least he isn't here yelling all the time.

Dealing with the VA, Federal Recovery Coordinators, Social Security, Wounded Warrior Project, and many many others...I am exhausted. My mind is constantly going so I can't shut it off long enough to get a good night's rest. I find that my memory is shot. I write it down and remember most everything but from time to time, I do forget something. I forgot to pay one bill, which was just one day late. There wasn't a late fee, we didn't have anything cut off, the end of world as we know it....wasn't going to suddenly just stop. This caused him to blow up on me. I thought to myself  "Ahhhh there you are!". I wondered how long it would take before the blame game and yelling would start. I had done nothing but scan, email, run to town to fax since we don't own one, go to his appointments, keep up with all the appointments, the kids, the house and all that goes in between...and one day late on a bill wasn't that big of a deal.  There are days where I am on the phone for six or more hours a day....all for him. Its been this way since January.

This led into "me being lazy. Everything I do is not good enough. I don't understand what he is going through. I don't get it. I don't try hard enough. I don't know what I am talking about most of the time and boy was I a hypocrite for writing a blog when I don't "get" it. You don't have a clue. You are the crazy one." I have to admit...I stomached most of this until the "you don't try" and me being the crazy one. God knows, that's all I ever do. My life has done nothing but revolve around him and his problems. I have no identity anymore. I am just the wife of a Combat PTSD Veteran. My life breathes, eats and soaks up PTSD and all that goes into it. It hurt. It really really hurt.

We got into it. Pretty heavy. I kept my voice low because I didn't want to upset the children or wake them up. Everything came out in that argument. The fact that I have to stay home and can't work (which is because of our child and because of him by the way). It was my fault I got pregnant after he came home now look at our kid who is sick. I am too lazy because I hadn't unpacked HIS suitcase from the Rehab program a week and a half ago (which has model cars and such so don't touch it because he wanted to unpack it). It was my fault he can't work, my fault he can't remember stuff and much much more. I have to say the things he said hit below the belt. It really really did. I know I am his only sounding board...but I got to have a break. His sounding board just keeps pounding me lower into the ground.

The worst part was having him scream at me and tell me that I should have let him kill himself. It was my fault because "God forbid that I wasn't his savior" on that January day. I think I could have heard all the rest of it and just ignored his ranting and raving. However, the latter part really really bothered me. So now he is blaming me for that? Out of all the things he could have hit me with....it seemed like that sucker punch was the worst. I could have dealt with all of it. Possibly swallowed it and let it ease on out throughout the week. Subconsciously push it back to the "ignore it and it will go away" portion of my brain. This I just can't.

All I kept thinking last night after I finally walked away and went to bed was....did I make the right judgment back then. Is he really that miserable and that bad off to blame and be so angry with me because I didn't let him kill himself? I stood there looking at him while he is yelling and screaming at me, but all I could think was "he is pissed because I didn't let him do it". I tried to keep him focused on what was bothering him hoping that he would calm down. He finally did somewhat, but I have to say.....I was absolutely terrified. I was so scared that January would happen all over again. My legs were shaky, my hands were trembling and I thought my heart was going to pop out of my chest. The more I backed up in the corner, the more he threw at me.

I feel broken inside today. How does one fix that?

He wakes up and gets his meds, acts as if nothing in the world is bothering him right now. I am still here this morning, and debating over coffee whether I should even bother continuing this blog. Maybe I don't have all the answers and as always, never said I did. I am learning just like you all are. Only difference is....I write about it. What could I possibly have to offer you all that I can't find myself? Am I really helping anyone or am I hurting myself in the process?

I am angry too. I am so angry my insides are going to burn up. I feel like I could self combust.  I am angry at the PTSD Rehabilitation program that failed us. I am so pissed at the therapist who I drove all that way...only to tell me to take him to another one.  I am angry at all those who looked at me and acted like I was stupid because this program didn't help my husband BUT, wait....it helped SOOOOO many others. One comment left by a friend of mine mentioned that "You can't use a one size fits all approach with PTSD Veterans". That line stuck in my head because she is absolutely correct. I am so very happy for all of those out there that found God and can cope. I am overwhelmed with happiness for those that found the right treatment or doctors to help them get to the point they can live with their PTSD. I am super thrilled for those that tried acupuncture and the "tap it out method" and it worked for them. However, a part of me wonders why my husband is so bad off that he can look at me, straight in the eye and blame me for not allowing him to kill himself. Yeah, one size doesn't fit all. So what happens to those of us who have Veterans that the one size fits all approach doesn't work at all on? Do they just keep going and someone finally say "Yep...I quit...can't do more for him." I wish just once...someone would look at me at the VA and say "You know what? He is bad off. We really don't know what to do with him." Instead, its change of meds...its "lets stick you in a six week program that is wonderful" or the "let's try you in a veterans group twice a month".

On his disability...I wish they would listen to me. Ask my children. Ask our family. Someone. Anyone. I have talked to all these other spouses, all these other Veterans with Acute PTSD and their temporary disability was granted on a three year basis. Ours was one year. So after I get done battling the Social Security department which I know will turn him down more than once, I am heading into Medical Review Board in which I am alone and not understanding. THEN when we get all these hurdles, we must then battle to keep his 100% for PTSD come next year because well hell, someone seems to think up there he might just get better.

I hate to disappoint you guys at the VA or burst your bubble. It ain't gonna happen fellas. He is just getting worse and I honestly just don't know what to do with my husband anymore. Some days are tolerable and that's about as good as it gets here. I wish the VA would have someone come in our home and oh I don't know....stay about a week. See what its really like when they fill out those exams and stupid forms. Maybe they would see a different side to it than base their decisions behind that safety glass of a desk.

I am sorry. The Mistress is just down today and in need of a hug. I guess it just hurts because I have fought so hard and for so long and not really seeing anything come from it. I don't want to say "I give up" but at what point do you say I quit? The stress of all of this is eating me up. I try to hide it most days but its still there. I wish I could let it all go and when I do...there is just something else coming at me. I know a part of me too, stops and asks myself "How far would my husband go for me?" How hard I wonder, would he fight if at all.

I am writing this out so I can move forward today and try to get some things done as far as more paperwork. I don't have any interest in it because well, since he seems to think I do nothing...what am I really do all this for? Just once....I wish he would stop and realize he wasn't the only one in the family who lost. Not the only one in this marriage who is grieving still after four years. He just doesn't think of anyone of us in the family at all. He just continues to get worse and it doesn't seem to concern anyone but me.

I needed to get this out. I hope it doesn't disappoint anyone because I am showing my weakness today. I am allowed to have "those" types of days too, so not going to really care what anyone thinks of me. I will get through this day just like any others and just keep hope that tomorrow is better. It's all I can hope for anymore.


One Size Didn't Fit Us At All,

Posted by Uncle Sam's Mistress at 8:07 AM