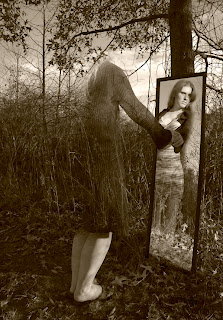 I was unable to sleep last night due to sinus pressure and just feeling lousy. It had started to snow pretty hard here so I got up and sat at the back door to watch as it came down. As I watched and my eyes became more adjusted to the dark...I saw my reflection looking back at me through the glass on the door. I looked horrible! Yes, Yes, Yes, I know it's because I am still sick....but it was more than that. My reflection simply didn't feel like me at all! I felt alien like...as if I was looking back at myself and thinking "who in the hell is that!" all in the process. The cold air felt good and one of my favorite sounds is the sound of falling snow in the still quiet. It usually soothes me, but last night all it did was make me feel more isolated.

I realized then exactly how tired I am emotionally and physically. How does one keep pushing on with such strength when all you feel is exhaustion?

The past week or so has been tiresome. Working on Social Security paperwork has been a bit daunting to me. Amongst all of that, I have had to write out my husband's "story" about his lost military records so our Congressman can have the full gist of the situation on paper now that they are going to help us. It's been a bit of a struggle to keep my husband's attention span which is now equivalent to that of my four year old, so he can sign what needs to be signed and filled out. It's been a paper shuffle all week; marking this...highlighting that....preparing for that "unknown" MEB date that has instilled fear inside of me like the Grim Reaper. I have become restless and antsy, irritable and hateful....just not me at all. I am almost ashamed at how grumpy I am on the inside, all while plastering that stupid smile on my face! I hide it from my husband, I hide it from my children...I hide it from the world as if it's truly a freakish thing.

It's been about three weeks since the bottom fell out, and I find my husband very aggravating. I don't know why either. May be because I am not used to having him home this much, could be a little resentment I have harbored for a while now coming forth, or the fact that he is driving me crazy already. Getting his 100% was a victory for us, but at what cost?  Was it truly a victory for him...or for me? I am still kind of going through the motions of coming down off that "let's go get 'em" rush and now that it's "temporarily" done; I am thinking, what do I do now? I still have so much to do like his social security but just have lost interest in most of it. I am so confused on much of this whole process, and that bothers me the most. Me, the one who always has plan A's and plan B's is simply "winging" it....there is not net to catch anyone of us and that bothers me the most. My husband says I can't control all of it, but is it really about control? I don't think so...it's more like being cautious and being prepared. I have heard advice from so many, but so much of it contradicts the others so I am more confused now than I was before!

My husband while home, hasn't done much. I have tried to keep him sheltered from any stress and keep him happy. It's exhausting. It really is. He has been taking my middle son to school in the mornings and picking him up which has been nice. My four year old is still under the impression that daddy will have to go back to work, so he pretty much demands that my husband take and pick him up since he is home. We have done a few little things around the house, but most of the time he just sits. When he sits, he starts getting irritable and annoying. It's "Well, I don't know what to do...it's too cold outside to work in the garden....I haven't not ever worked...I haven't ever just sat and done nothing". I understand...I really do. It's been quite an adjustment for all of us, trust me. However, I feel like he is complaining and unhappy. So if that's the case, why fight so hard for disability if he doesn't really act like he wants it or is appreciative of it? There is no happy medium with him. He constantly complained and whined about not getting the deserved benefits he earned....so I busted my hump and fought tooth and claw to get them....we get it and he still isn't happy! Maybe my mood is feeding itself on his negativity and I am afraid that its going to start a small fire only to end in an explosion.

To top my mood off, I have been sick for what seems like forever. Can't seem to shake the flu like symptoms and sinus issues. I know much of it is my stupid low immune system from RA, but would have thought I would have gotten rid of it. It just keeps coming back and I am wore out. Now I really am going to whine, but I know many other wives out there will be reading this and saying "uh huh..I hear you girl". After almost five years of coddling, taking care of it all and leading the fight...I just wish when I was sick..he would give me a break. Maybe coddle me a little. I know it's selfish, but  I think I deserve it. The last two weeks, I have been pretty sick. He left to take my son to school and disappeared for a couple of hours. Found out he was down at a friend's house who was outside working and stopped to chit chat. No big deal.....he finally came home long enough to eat, go get my son and drop him off and gone again. Now in the meantime, I have vomiting, severe headache, cold chills and fever....and trying to deal with a cranky two year old who is in need of a nap...and a four year old who is wound up from school. All I wanted, was to take some medicine and lie down. Just for a little while and rest. Didn't get it. Instead, I got two screaming children under the age of five....a pre-teen who had a bad day at school and came home with a horrible attitude, and a pounding ass headache.


The only concern he seems to have with me is "I got to get you feeling better so we can have sex again". WHAT! The LAST thing I want right now is sex. I hate being that way...I really do but jeez man. If you see I am sick, you know I am sick...then why could you have not stayed home instead of leaving? He just walks away like he doesn't care. I know they are cold, have no sympathy or empathy for anyone anymore...but damn, I think this is the part of PTSD that pisses me off the most. My doctor says, oh you need plenty of rest with the flu and pneumonia....never got that. I was out in the 20 degree and below weather walking the VA grounds trying to get things done. "You need plenty of rest" comments from my doctor is compared to that of "Hey, here is a million dollars and how about a free month long trip to Europe". Hmmmmm....never happened. So here I am...three weeks later, still sick.

You know, after reading what I have just written...maybe its a little resentment towards him for not being appreciative for all the crap I went through to get to this point. Perhaps its the fact that he could care less of what happens to me or how I feel that is bothering me so badly. You would think after almost five years of this, I would just get used to it and get over it. I don't think it's that easy to get over. It's the past three weeks of emotions and hell, its the last four years....finally we get something going our way and just expected him to take care of me now that I am down for the count. I went to bed last night so freaking angry at the world, well mostly him.  I wonder if he completely comprehends how much life the man has absolutely sucked out of me. I wonder if he understands how much hurt he causes, even when he is not a raving lunatic. I wonder if he knows how much disappointment I hold in our marriage currently? I will be sad to see him go to that six week program, but I have to be honest and say....I will be glad for the break. I think the time apart will do us some good especially me.

Perhaps during that time, I can fix myself....repair that fractured image I saw in the reflection early this morning. Perhaps, I can take time for myself and repair my feelings when he is not here tromping all over them. Then again...perhaps I am merely being hopeful and that reflection of what I saw...will be who I will be for the rest of my life. A new friend I have met through contacts, sent me an article yesterday asking for me to call in and please report back my findings for article purposes and research. I read through this site, DCOE Blog , and wonder if they would have anything for me? Or is it going to be another damn disappointment as some of the others like Military One Source? I think sometimes maybe I am burned out....wiped out, and in need of talking to someone professionally who can sort through all this crazy crap in my head. I told her I would call but what do you say? "I am all the above...so what can you do for me?". I have been dropped so many times, that I am just not sure I can handle another one. I have become so numb in some areas of my life, but at the same time...so freaking fragile and sensitive in others. I think when these organizations or "programs" tell you, "I am sorry, but we just don't have anything in your state or you are not eligible for any of it because you are Reserves", that they should have to see our faces when they say it. I know so many are doing a wonderful thing, they really are...but there are some who just act like its now a chore to talk to people and forgot the real reason they started such programs. They never stop to think how their hatefulness coupled with dashed hopes can really wear on a person. If I decide to call, will let you others know what I find out...or if you have experience with said program, could you pass on a little information my way? I think I am little ashamed to say I need help coping and need some guidance.

Posted by Uncle Sam's Mistress at 7:38 AM