No Padded Rooms Or Rubber Hoses! (The PTSD Inpatient Program) 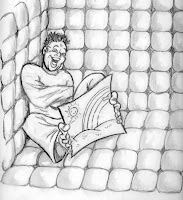 I am going to back up a little here and answer some emails I have gotten! Thanks to all my readers who wished us luck on our new adventure of the Inpatient PTSD program in Lexington, KY. Many asked me who, what, when and where...and some just wanted some updates! Makes me feel like we are part of a family now, even if it's a dysfunctional one! To my Veterans who inquired about such programs...good for you guys! Hoping you all found out something through your VA or caseworkers for your local VA/states.

So as many of you know...my husband was accepted into an inpatient, six to eight week program for PTSD which is in Lexington, KY. My husband was readily willing to try this, which at first I found a bit odd. Of course, the negative little devil sitting on my right side which was given birth to by PTSD stated "He is only looking for a way out of dealing with his family for so long", while the other little nice side is yelling " Wow! How awesome is that? He is willing to leave and go into this!". I always hate when the negativity seems to be swatting around my ears like a pesky bug! I used to not be so negative and "Miss Doubts a Lot". So we applied, went through the whole process of question and answer time with a very nice doctor on the phone. Few days later, we got the date to be in KY and for admission.

My husband was somewhat looking forward to it, although I think he was dreading leaving me and the kids. It was all going good up until this past week when things started coming apart at the seams slightly. He began to find other things to do than spend time with us. We had a "date night" which he was totally late coming home for by hours and his attitude was "oh sorry" with that whole look of "quit your bitching woman" on his face! He was intentionally giving me attitude; anger and the PTSD beast rearing it's ugly head around here like some psychotic rodeo was in town! I have to admit that I was ever so glad for him to be leaving. It seemed all we did was fight before he left. We argued about the being late, not getting stuff done and I hated that. I really did. I hate that we fought the night before he left. It literally made me sick and I ended up crying myself to sleep.

We made the long trek there which was only about a 4.5 drive, but God....did it feel like forever! He complained of stomach pain, cold chills, nausea, diarrhea...you name it, he had it. There were a few times in the Cumberland Gap that he wanted me to turn the car around. I suspected too much of the ol' nerves was at play and kept on trucking down the road. We got there and was a little concerned myself because this place is quite old and for the life of us...we could NOT find the entrance into the building that we needed to be! Surely thinking this is a sign that things are going to be bad, I tried to make jokes to my husband to keep his spirits up.  Architecturally from our VA, it did look quite daunting to the both of us when we pulled into the parking lot.

Finally figuring it out, my husband became a little agitated. We went in to where we were supposed to be and I told him as he was fussing all the way, "Hey, the walls aren't bleeding....doesn't look like you will be leaving with Asbestos, and it's free from glass windows and bars" which made him snicker. The glass windows and bars being the reference to when he was committed for psychiatric reasons when he had his "fall out" and the patients were constantly monitored by the glass windows separating them. (Hey, gotta laugh about it!) We came in and the receptionist seemed OK although busy. It was all new to us, my husband "sick" and I was a big ball of nerves and on the verge of a crying jag. There were men coming and going, but what surprised me...was how nice they all seemed. Each one of them passing us, asked how are you...or hey buddy. Now my poor husband, has always had this "look" which can often be very very intimidating. I reminded him to play nice with others and try. He straightened up a little and it seemed to me that it wasn't going to be that bad. I liked the fact the lady at the front desk could stand in with the others and with playful banter. I didn't think he would have a hard time at all once in there. I did remind him thus far, I didn't see any signs of electroshock therapy or padded rooms with rubber hoses!

We had to wait a spell for admission and my husband had to go through some check in procedures such as breathalyzer, blood pressure, the old pee in the cup routine. The nurse was friendly and then my husband tried to tell her he was so sick, probably with the stomach flu. She looked at me, I looked at him and she said...."If you are sick, we can run you over to the ER for treatment honey and then when you get done...they will bring you right back here". I had to inwardly laugh, because I thought to myself  "Yeah slick...whatcha think about that! Ain't no going back outta here buddy but nice try"! I bet that lady has heard it all. Once she left us again....he broke down and cried. He looked at me and put his head in his hands and said "You are taking me out of my bubble".

I have to tell you Dear Readers....I thought walking away with him screaming at me from the ER that weekend of his breakdown was the hardest...that absolutely broke me. I panicked. I felt as if suddenly...I was letting him down! Maybe we made the wrong decision...maybe this is not going to be the right place for him. Then it was out of the blue, and how I managed to get the words out of my mouth was amazing; I said " Honey, this bubble has been broken for many years now and no matter how hard I try...I can't keep taping it back together. I am all out of ways to repair it". I was stunned! How could I say that!! "You have to try and do some of this by yourself and for yourself".

HOLY MOLY! Where did all this come from! I cried of course....I cried with him, I cried for him and I cried for myself. I felt like such a horrible person and spouse but there just comes a time in living with PTSD and TBI that you as a spouse can NOT keep taping and holding it all together anymore. I know I have said it on many occasions but I have come to learn that in every PTSD Vet there has to be that pivotal moment of realization that there is something wrong with them. There has to be that one thing that makes them say enough is enough. In our experiences, and mind you I am no professional...I think the same rule applies to us as Caregivers. I think the past month for us as a family, was the pivotal moment for me. I finally said "enough is enough". I explained to him how much I loved him, but I just can't keep going..he is absolutely sucking the life out of me.

The goodbye part was of course, the hardest. He acted as if he suddenly needed to rush....get me out of the way, into the car and Adios Amiga! I knew though it was all for show and he just didn't want to cry anymore.  It was really hard to pull out of the parking place and look back in my rear view, to see him walking in with his shoulders slumped. I can almost compare this to that first day you take your child to Pre-K/Kindergarten for the first time. He can use his cell phone nightly so it's not like he is completely locked away from us here at home. I have spoken to him nightly since he has been there on Tuesday and other than a few minor complaints of "not being home"...he is doing just fine. I was quite impressed with the fact in his goals to achieve that he went over with the doctors there, that trying to work on himself and interacting with his family was one of those. I just feel sometimes that we aren't in his priorities. At all...not even in third place and hoping for second. I feel as if we could all just disappear and the only thing he would say is "what about dinner?".

I am trying to be optimistic about this program and somehow a little hope has been raised within me. I know the time away from us will help. I know I definitely needed a break and use this time for just me. I know he definitely needed this time to work on himself and find some good outlets for his anger, frustration and other things he never wants to talk about. There are a couple of others from our area in which they live which is awesome! I think having a lifeline or perhaps a "post-war" battle buddy when they come home will be good for all of them. I have encouraged him to make friends so when they come home, they can hang out and have someone within each other that not only has "been there" in war...but also, really really been there in the aftermath of PTSD and all the baggage that comes with it.

I miss him terribly...I still feel the slight guilt pangs that I am not there protecting him...sheltering him from life and that I have uprooted him and put him into not only another state...but yanked his whole life from him. On the other hand, I feel that I just can't keep going. Something has got to give here. I know that this is not a cure all...we will always have issues and PTSD/TBI will always be sitting smack in between us. However, I hope that this will teach him some coping skills with his anger. Perhaps he can find a way to get out whatever is slowly eating him from the inside out. I am hoping that just maybe....he will remember that I love him this much and that possibly it will remind him how much he loves me. Sappy I know...I have been so deprived for the last four years and just literally long for that deployment time where he told me that he never realized how much he loved me until we were separated. I don't know if I am setting myself up for failure or not in thinking that, but hey....hope is about all we have to hang on anymore these days and if it allows me to sleep at night...then I will keep hoping. I will post more as it goes on....maybe through our experiences, it will help some of you navigate through this crazy haze.....

Posted by Uncle Sam's Mistress at 7:07 AM