Secondary PTSD and Me

I once read an anonymous saying that stated "Everyone's crazy...just some more than others". I used to laugh at that statement especially in college where my Psychology professor told us that everyone had symptoms of OCD  hardwired in them. Thinking back, I can say I do have a slight problem with counting things or keeping things in a particular place. I have watched others with odd quirks of their own, and even my own mother who obsessively counted objects on a curio cabinet. There is only room for one crazy person in this household and so far my husband is reigning number one. I do have to admit though, I have changed so much in the last three years I barely recognize myself anymore. Am I on the path of becoming second runner up in the race of being nuts? 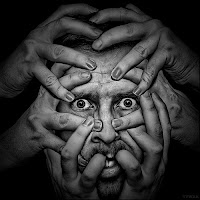 When you are seeking information regarding PTSD you usually come across the term of "Secondary Post Traumatic Stress Syndrome" or "Compassion Fatigue". I have read on Family of a Vet, (a site in which I haunt quite frequently) about this subject and the author/owner of the site has a special way of describing things on an every day person's level. Another words, it's simple, to the point, and in no way must you have a Harvard degree or be a psychologist to understand any of it. If you are a caregiver or spouse for your veteran with combat PTSD, definitely check out her site along with her description of Secondary Post Traumatic Syndrome. Now I didn't go out to seek out my mental problems nor did I think in anyway I am going nuts...but I admit that I have had some problems here as of late.

My last doctor visit my blood pressure was really high...enough to be put on medicine for it. Tension/migraine headaches can sometimes be debilitating to the point where now I have a special med that is a kick ass Tylenol mixed with Zanax for nerves. Let's add in the anxiety pill that I take as needed, and the medication for depression which is really for my Rheumatoid Arthritis (I promise I am not 80!) and helps combat the battle of the blues in the process. So the two or three bottles of meds have now increased to 11 and I was forced to get a pink old lady pill box daily reminder for myself all before my 35th birthday which is quickly approaching! It's quite depressing really because I still feel young, still feel somewhat sane, and embarrassed I should have to admit to anyone I am taking so many pills. My doctor made a comment that I could be suffering from Secondary PTSD so I have been looking at it a little closer now that she has brought it up.

So in case you haven't looked yet at Family of a Vet's explanation of SPTSD because you are reading this blog, here is an excerpt that I found on another site, counseling.suite101.com.

Anyone who gives care to a traumatized person is susceptible to STSD, including children and spouses of active duty military personnel. It seems to be more likely to occur among people who have experienced prior traumatic events themselves. People who have other types of mental illness may also be at risk. However, social isolation or a lack of inner resources, such as a strong spirituality, can cause anyone involved in the care of a traumatized person to be debilitated by STSD.

People with STSD may experience the same symptoms as the traumatized person. These symptoms include depression with suicidal thoughts and feelings, as well as feelings of loneliness and betrayal. This condition may also lead to substance abuse. Many people with STSD will have difficulty carrying out regular tasks at work and home. In some cases, their ability to cope will be severely impaired.
Family members of traumatized persons will often develop hyper-vigilance. Since they are impacted by the traumatized person’s emotional crises, they become sensitive to small mood changes or other risks to stability. Eventually they may find it difficult to relax and feel as if they are “walking on eggshells.” This may also make sleep difficult.

Ok...no suicidal thoughts here and I don't recall a traumatic event in my entire lifetime except my first marriage which was a nightmare. Mentally, I have always felt I was a stable, sensible, albeit somewhat moody person. However, in the past three years I have resorted to crying jags, sleepless nights where I can't clear my mind or when I do sleep....have horrific nightmares which include my husband in them. I do know I can't relax and can't remember the last time I have. I feel as if every move I make is going to set my husband off or worried that the kids will do something or be loud, therefore I am going to get my ass reamed for no reason. I seem to be the gutter for everyone's problems and no one in my family really seems to care that they put so much on me....I do sometimes get overloaded. I have noticed that my patience has gone down to zilch and the big heart in me has somewhat shriveled up. I don't have things to look forward to anymore, I don't have any friends let alone any who know what the hell I go through, and it seems like I am in isolation but not because of me. It's because the fate of PTSD has cursed us and taken away what little friends we did have.

I did take Family of A Vet's idea to "get involved" so I did. This has helped not only keep me busy, but gives me something to do as well as make some difference for others. The only issue is that the part time work I gave the FRG has now led me to take on leader position, the Disabled American Veteran's Ladies Auxiliary
has given me tasks I must complete, and THEN I make candles in the process which is somewhat therapeutic but has gotten so large that it gives me a heavy stress load. I then blog on three sites which helps me and is really the only thing here lately I have thoroughly enjoyed doing as it releases so much stress and weight off my chest. I find that any chance I get, I talk about PTSD and TBI just so others are educated and try to help other spouses with resources. Occasionally though my husband yells at me to slow down, and so does my doctor, but what they don't realize is all of this....is my only escape from home. Granted most of it is done from my home, my computer and phone...but it gives me something else to focus on besides just the PTSD. It's nice to be around people that don't yell, scream, and cuss at you. Perhaps its just being around normal people for a while that is nice. I didn't realize until this past year how starved I am for a little attention, and even more.....appreciation.

I am getting really forgetful. I don't know if its my RA kicking in, the stress at home, the kids, the crazy vet (ok before I get bashed, that's what he calls himself), or just simply my brain is getting too overloaded because of all of it. If I write it down, then I must remember where I put it. If my ass wasn't attached, I would have lost it a long time ago. I did upgrade to a desk calendar which has helped me tremendously. Household chores are simply becoming overwhelming. Mainly because time flies here and it seems like yesterday I just did 20 loads of laundry and put it all away....when in reality it was last week. Five in a family means a lot of laundry especially with two potty training. I do think sometimes though my laundry is secretly breeding downstairs in the washer. My sister swears they are like Gremlins with disregard of them getting wet and feeding them after midnight. To clean the house or do laundry, even cooking supper has become monstrously hard for me to deal with. I maintain a clean house and never has my family gone without a home cooked meal, but if I had my druthers, I could easily put up a "Mom/Wife on Strike" and be content with it. I am simply emotionally and physically tired.

I do feel lonely...extremely so. I once told the marriage counselor we see that although my husband is here, we are so far apart that he might as well not be here. Betrayed? Hell yeah I feel betrayed! I feel I got the shaft by everyone and that's not limited to the government, the VA it's including family members like my mother in law who's ignorance and lack of consideration, plays not one part nor helps with my husband. It's "Oh well honey". I feel betrayed by the best friends who no longer talk to us and well....I am just all around pissed off most of the time! At everyone, everything and anything. Most of the time I wake up angry and don't even know why! This is what saddens me the most. Because my kids are going to grow up with a father who isn't there mentally and a mother who is slowly becoming one big angry ball rolling from one day to the next!

The VA doesn't offer individual counseling, the Vet Center only offers counseling for both the soldier and the spouse, and most therapists around here either a, don't take our insurance or b. Don't have a clue as to what the hell Combat PTSD is let alone work with you on it. I was quite surprised to learn that some in this area don't have a clue, and send you somewhere else. Well, what the hell did they learn in college then? I guess I would rather them be honest and tell me upfront that they only know what's in the Diagnostic book than try to fumble and not really help at all. Marriage counseling is ok, but tends to focus on the Vet and his problems more so than the spouses in our case. I don't feel I can get enough out or even that the therapist is really listening to  me.

I guess my biggest concern is whether I am suffering Secondary PTSD after three years of dealing with my husband? Where does one go to get help with that when resources are so limited and will it get worse as the years progress? No local wives to talk to who understand, no time really between three kids for just me, and no resources military wise for counseling....support group at our local VA is not an option as I have been there and done that. I hope that I don't get worse, as I really don't wish to think myself as slowing losing it and becoming my worst nightmare, being like my husband........

Everyone's Crazy Including Me,