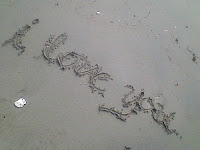 So it's been a very eventful and stressful week for me. My unit's annual Family Day is next weekend and of course, things start to fall apart right about a week or two before. Due to our geographical challenged locations of our FRG members, it left most of the work to us two leaders, and more so on me because the other who helps me, works. Trying to get approximately 400 people fed, provide entertainment in forms of competitions, games and let's not forget 73 children, has taken its toll on me this week. While I am curled up in my metaphorical mental fetal position, I have endured severe migraines on top of everything else. I figure it is from stress and trying to get things done before our deadline. The one thing I didn't need this week was an irritable husband giving me hell. I have literally been waiting for an outburst, mentally preparing myself so I would not get angry with him for giving me grief, and pretty much banked on him adding to my stress level.

However....that hasn't been the case this week. I was quite surprised to see my husband in a really good mood all week which is few and far between. He volunteered to go with me and help me pick up over a 1000 drinks from area bottling companies who donated, tried to keep the kids entertained while I had to run in and out of businesses who donated to us, and most of all...was sympathetic to my mental breakdown I had this week when things started to go South. He was very understanding and sympathetic when I didn't cook supper and stumbled to the phone to order pizza while the nuclear warheads were exploding in my head, helped me with the kids and putting them to bed, and listened while I bitched and fussed about the problems I had going on.

I didn't realize until yesterday when I was feeling a little better, how he seemed to tag along and just be normal. There hasn't been any "incidents" or angry blowups which has literally floored me. Now of course, he still acted strange, got lost or confused, and had the patience of a two year old, but I can't blame him as I was probably the beast this week. The thing that I noticed the most was he called me Baby. Not just once or twice, but every time he talked to me or relayed information on the phone. He would ask me if I took my medicine (which is a switch) for my migraine and let me rest while the kids played. I can't tell you how much I missed hearing these endearing terms and how they kept me going this week. Even when things went sour, he would say " I love you Baby" and things just felt tolerable. While talking to me or saying something, he would end with Baby....and well, it was just a nice change of pace for once.

In the back of my mind though....I always wait like this is the calm before the storm. I hate to be that way, but sometimes when he is this way, there is always a backlash that is coming up in the future. You know what though? I really don't care right now about what will happen if it even does....I am just going to relish and wallow in this good mood of his and enjoy it for once. I know it won't always be this way and I haven't had much time with him that is like this, so just going to close my eyes for a bit and enjoy the ride..........

Love you too Sweetheart,

Posted by Uncle Sam's Mistress at 5:51 AM