Penny for your Thoughts 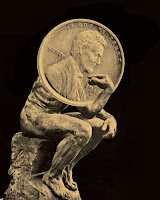 A couple of thoughts have entered my constantly turning mind this week while working on other blogs. I know our situation might not be as bad as others, but there are more and more of you coming forward with emails sharing with me some pretty good horror stories. I'm so sorry you are having to go through all this. As a spouse, I often feel alone and shafted but I can't imagine what some of you are going through and it hurts to know that your Veteran is doing so poorly as well. I have been doing a ton of reading and researching but mostly referring to my situation as that is my way of coping. I have to confess that alcoholism, drugs, pornographic addiction, and domestic violence has not been in my research although these terms have frequented my computer screen in search of other items. It's not that I choose to ignore them, but perhaps maybe my inner conscious nibs at me and I try to overlook them so I won't have to deal with it. Kinda like that whole saying of "if you ignore it, it will go away".

I will admit that my husband has walked down the promiscuity avenue. It caused our separation the first year he was home and I don't think I will ever get over it. Now I understand what the counselors say, also that my husband has readily admitted that he did it to just hurt me intentionally although he doesn't remember why. "It didn't mean anything and I don't know why I did it. Maybe I did it to punish myself". He knew I have no tolerance of cheating because my father had done it to my mother. I have a hard time of forgiving and forgetting. Just not in my genes and from time to time, the wound reopens with a subtle reminder and I get hurt again. Can't help it.....no matter what all these counselors say, no matter that my Veteran was suffering so poorly that he pushed me away and didn't know what he was doing.....point is: he still violated my trust and let me down. Counselors can spin it any way they want to, but I still have the hurt, the demolished self esteem and lack of trust that I must constantly deal with. I have spoken to" her" at one time and she assured me that nothing happened, but it's all bull shit. She took advantage of him and she readily admits it. I am glad I had the opportunity to say what was on my mind to her, but not sure if it really helped me or not. Time will heal they say, I don't know. I did love my husband enough to forgive and try to work on our marriage as it was important enough. It also gave him a reason to try for more help and there were many obstacles that I made him overcome before we even attempted to try again. It wasn't so much ultimatums, but I felt he had to earn back my attention.

Alcohol and drugs hasn't played much into our issues as much like many of you. We do have our knock out drag down fights when he is in a "mood" and decides to go buy a large bottle of Jack Daniels. He will come home and hide out in the driveway in his truck while finishing the bottle. (thank God he is sane enough to remember the consequences of drinking and driving) By the time I realize he is there, he has sucked it down so fast that he is already drunk. Doesn't happen very often, but I have noticed a trend here in the last three years.....those "moods" seem to fall on certain dates. Don't know why these dates are so hard on him that he feels he must self-medicate with alcohol but it happens every year and probably will happen in the future. It has been this way since he came home and pretty sure these dates were in relation to deaths of other soldiers and the fatal IED explosion. I maintain a tight checkbook so spending on alcohol is not much of a possibility with him just like abusing drugs. However, in the back of mind I always keep a close eye on him just because my trust is not at full force, and well hell, you never know right? Smoking he has never done and will never do, but I notice that "chewing" has become a serious vice here in the last three years.

Domestic Violence......my husband does have a volatile temper. Together, we are both as stubborn as mules and our arguments can quickly lead to screaming at one another. The clash of our tempers, mixed with the combination of stress, aggravation and frustration can easily put him into a "blackout". While he has never hit me, he has done some damage to our home. I guess I can thank my lucky stars but I have learned quickly to get out of the way, walk away when my temper gets the best of me, and take a break. I can usually tell when he gets to the point of blacking out because he doesn't even look like the same person. His whole facial features can easily change and his eyes...well let's just say he scares the hell out of me sometimes. I sometimes wonder if one day he will suddenly snap and give me a good pounding. What would I do then? I don't know how I would react to a situation like that....especially when I have children in my home.


So those are just a few thoughts on my mind right now. I would love for someone to talk about this (you can do it anonymously) and what are your coping skills with these topics if any. Perhaps with your comments, someone else can find solace because they are enduring the same hell you are. Resources for these are welcomed too!!!