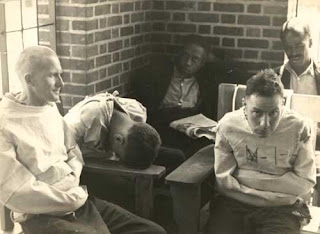 My husband and I watched the movie Shutter Island, which to say the least, was pretty weird but somewhat interesting. After the two hour flic, we went outside on the porch to catch the fresh cool mountain air. We talked about the movie and the criminally insane. This led into treatments and an explanation of what a lobotomy was because my husband had never heard of that term. As strange as our conversation was, it seemed one topic would lead into another. We started talking about PTSD and all the things I have been reading about and learning. I told him that I found an online book about PTSD and that it was called all these other terms such as "Soldier's Heart" and more familiar "Shell Shock" and various treatments. The book had references made all the way to the war of 1812 with soldiers with a diagnosis of "Soldier's Heart". Interesting although some of it was more historical than anything.

So this led into the conversation of treatments of insane asylum patients and then of course, PTSD. I told him I read that electro-shock therapy was often used back in the day, thinking that would be a cure all for symptoms of insanity. This same treatment option was also used for patients suffering from PTSD symptoms way back when and still used in some patients today. Although the same method is much more humane than our past ways of doing it, still the thought of having shock treatments is strange to absorb. Lobotomy's were also used in treatment of PTSD in hopes that it would cure flashbacks in which were interpreted as hallucinations/delusions by psychiatrists. My husband asked me "What did they do with some of these people?" I said "I gather from what I read, a majority of major sufferers were put into mental hospitals and died there. If they had gone over the edge, and no one would care for them, they would lock them up and throw away the key."

My husband chewed on this last statement of mine while watching the stars and lightening bugs, and quietly he asked "Do you think I will get that way? Go over the edge?"

Lord, did my heart drop into my stomach and did it drop hard. I looked at him and said " I won't let you go over the edge".

To lighten up the stillness, I did turn to him and told him if he kept giving me shit all the time, I would perform a full frontal lobotomy on him myself ! We chuckled and went back inside to go to bed.

That one statement really ate at me all night last night. I guess more so, because I didn't realize how worried he was about himself. Possibly worried if he got worse, would someone be there to care for him? Does he think that someone would lock him away and throw that key into a forgotten place? Does he think in his mind that I could do such a thing to him?

I think it was more of a realization last night than anything. I realized that my husband depended on me heavily, a lot more than I give him credit for or even myself for that matter. Not just to pay the bills, or to wash his clothes, make sure his meds are refilled and remind him to shower and shave when he tends to lose focus and zone out on me. It's more than that. The role of caregiver is daunting to say the least, but it must have been the way he said that statement, that made me realize no matter what.....

I was in for the long haul in our marriage.

So strange as this must sound, a weird movie about a man, played by Leonardo Di Caprio,who suffered from possibly PTSD and lost his mind; somehow found my husband and I on the same ground for once in a long time.

Posted by Uncle Sam's Mistress at 6:37 AM