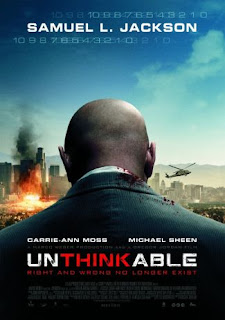 Unthinkable Trailer
On Wednesday, I dropped by our local Blockbuster Video to drop off our copy we rented of Alice in Wonderland and our Barney Movies (Thank God we turned those in) I had rented for my little ones.  While in there, the manager told me she was getting ready to put the new releases out and some had just been returned. Curious and out of the loop since we do not get out much, I asked what she had. She had the movies Unthinkable and the Green Zone. Now I had heard from some cop buddies of ours these movies rocked when they saw it in the theaters and was worth the buy. She kept it aside, we finished our rental purchase and out the door we go. I never looked at the cases nor did I know anything about these movies other than what was on the Blockbuster window movie posters. We are Samuel L. Jackson fans and Matt Damon we can tolerate, so why the heck not?
Synopsis: The story hovers around a terrorist who has planted three nuclear bombs in United States of America and a black ops interrogator who is responsible to make that surrendered terrorist in divulging the locations of those bombs. As the story progresses it is witnessed that a combination of psychological techniques and extreme torture is applied on the terrorist who knows more than he claims he knows. However failure in able to crack the terrorist, the interrogator thinks the Unthinkable, applying the similar brutal methods on first his wife and then his kids and no one can dare to stop him for he has the clearance from the highest authorities. The movie is a tug of war between the terrorist and the interrogator and no one is ready to give up.

This psychological thriller is no way shape form or fashion for those of you who have weak stomachs and is really really graphic. Politically charged, this movie was one I would never see again just due to my husband. Going back a little here so you can understand a little, we can't go into crowded places or really anywhere. Our marriage counselor we see suggested we spend more time together alone, which isn't easy since we never go anywhere and rather than taking my husband out, I thought "Date Nights" at home would be at least healthy for me. However, being manly macho man he is, this knocks out our rentals if it has anything remotely resembling love, romance, high heels and makeup. He isn't into girly chic flicks and well I can't blame him. I need some girly time though, and most definitely romance.

Unfortunately, romance hasn't been here in my home since he came back from Iraq and I live vicariously through actresses in movies. I also live through my friends who constantly remind me how their husbands suddenly wisk them away for a weekend or bring home roses for no reason. I live with three boys and my husband...even my fish and snail is male. I am up to my ears in blue, John Deere, matchbox cars, and the game of "Army Soldiers" as my four year old calls it. Football, basketball, baseball, hockey and military type shows is about it around here. If I didn't do something girly for myself every once in a while, I would swear I sprouted testicles and have the urge to scratch and rearrange!

Getting back now, I try to compromise but mostly give in, because I am that desperate for some normalcy and something that resembles a "Date Night" with my husband. Not sure if this is what most would compare it to, but its something and something is always better than nothing. Throughout the movie, it was military and FBI focused with just a touch of politics to make it an interesting plot. There were a few times I looked over at my husband and that usual "glaze" he has is gone. So I think to myself, "you must have picked a good movie there girl!". He was dead into it, paid full attention and well seemed a little too enthralled.  The movie rocks along, gets graphic and disgusting, and then the end comes. This movie makes you really contemplate one's morals and choices.

Without ruining it because it is in the synopsis above, there is a part of this movie that involves the attempt of torturing children. Being the thinker I am, I had to chew on this movie, it's purpose and what kind of human beings are capable of doing this to others. My husband meanwhile is talking about the movie and the ending, which led into small talk. I told my husband I didn't like it, didn't feel that children should have been used in this plot and that children are innocent. The relaxed, movie enthralled and focused man left and emerged the nasty beast faster than you could say "Holy Shiznet"! He moved forward in his recliner, grabbing both arms tightly on his chair and snapped my head off! " There are NO innocent children over there." Yes, I argued. The children in this movie didn't do anything nor did they have a part in the plot. "They are expendable and not innocent" he stated, infuriated.

Expendable in war? Really? I don't know why I felt the need to argue with him and perhaps hindsight is now seeking in, but it set me off and most definitely set him off. I told him that all children are innocent, they are simply bi-products of their parents and how they are raised. I could tell he was really pissed and that empty cold stare glaring back at me, somewhat scared me. He looked at me with this mean menacing look and yelled "get online and look up how many children walk up to us with ^%$#^%$#@ bombs strapped to them and tell me they are innocent!" "It's kill them or have them kill us". Trying to then calm him down, I stated I understood that but was it their fault that their parents raised them this way and instilled beliefs? It wasn't the child who put the bomb on it was the parents. He said "In war, everyone is expendable. You must do what you have to do to protect others".

This is what concerns me. I know that I should never ask, and from what I do know about what happened in Iraq...I don't want to know anymore. However, what set him off? My comment or the movie? Had he experienced these children strapped with bombs? Seen the innocence lost and now no longer sees small children as anything other than the enemy? I think the part that scared me the most was that "look". If it had been looks to kill, they could have buried me twice. It was so cold, full of contempt for me and you could have probably looked at him for hours and never once saw anything that resembled my husband. What looked at me last night was simply a changed man with so much hatred and anger, that he really really unsettled me.

I told him I understood and yes, he was absolutely right. He was so far gone by that time, I simply just left it at that and went to bed alone. I spent two hours tossing and turning thinking about our conversation and wondered in my head....."what did he do over there?". I know I was in the wrong to even make the statements to begin with and I am no fool. I know what goes on there and from stories told by soldiers, the unspeakable horrors against our servicemen and women. Yet, somehow the statement "In war, everyone is expendable" just disturbed me on all levels. I don't know why, but it just did. Does this mean all of them, not just the bad guys? Perhaps its because I am biased living in my sheltered world and have never experienced war? Maybe it's because my heart is too big and I hurt inside when the thought of small children, armed and lethal, should never be a factor in war. Who does that to their own children? There will always be more questions, and never any answers...but have learned my lesson. Next time I think I will stick to a comedy even if it sucks, than rent anything like this again for someone with PTSD. We haven't watched the Green Zone, and do believe this will be a movie I won't watch or comment on with him in the very least........