One dear fellow blogger, One Veteran's Battle, and his wife PTSD: A Caregiver's Perspective, pondered over my Reminiscing post I made in regards to keeping letters that were sent home from war and my feelings in regarding to being fooled into believing everything was normal. One Veteran's Battle's response to my post was compelling and written beautifully. With his permission, I am posting this on my blog along with links to his blog (just click on the purple words in this paragraph) because his response really made me look at my souvenirs in a different light. I felt is was important and informative enough to share with my readers and followers..............................
Coming Home From War 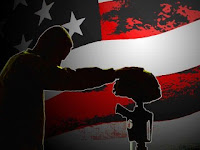 This morning, my wife posed an interesting question. She follows a Blog entitled Living with PTSD and TBI. In her post 'Reminiscing,' the author points out that while her husband was in Iraq his letters seemed his normal loving/caring self. When he came home she expected him to be the same man that went to war. His letters gave no indication of any problem.

When her husband came home he was a very different person. Now he's filled with "anger and contempt for everyone." She feels as though keeping the letters is akin to keeping letters to an X-husband.

First let me say, I'd definitely keep them. When I came back from Iraq and was struggling, my wife and I started family counseling. She used that counselor to inform me she wanted a divorce. I learned later she'd already gotten an attorney and filed the divorce papers 5 days prior. I had missed 3 court appearances and potentially could have been locked up, and I wouldn't know why. She's done many other horrible things to me which I won't go into here, but I wanted to illustrate I had good reason to despise her.

Despite the fact I hate her with every breath I draw and every beat of my heart, I burned letters sent by my X but I wish I hadn't destroyed the few letters she sent me. Sometime in the future you may have a question about the time your husband was in Iraq and those letters may be the only source for an answer. This is what happened to me. I remember my X saying something in a letter and, forgetting I had burned them, I turned the house upside down looking for them.

Regarding the changes in him once he came home, he essentially couldn't adapt to the new environment. When he was in Iraq, neurological pathways in his brain changed. New pathways are created in order to function in a combat zone. The fight or flight response prepares the body for action under stress and danger. The adrenalin is pumping through his veins. His heart pounds and his breathing increases. His body might even begin to shake uncontrollably. He has the increased blood flows into his muscles and his strength is increased enough for the given threat. The analytical mind is shut down and all the rational thought is non-existent. Your husband is responding to anything he perceives as at threat or danger.

The increased strength that comes from this response is a result of your his shutting down non-essential functions such as the digestive system and the frontal part of the brain responsible for rational thought. By shutting down parts of the body other parts have access to the energy needed for the survival response. This is manifested in form of increased strength.

While your husband remains in Iraq he will seem normal because he's in the environment that his brain has been wired for. He's not aware of it because it's completely natural and it happens without conscious knowledge of the process. His letter's wouldn't indicate a problem, in fact, it may be quite the opposite. I know when I wrote home, car bombs, fire-fights, and dead friends was the last thing I'd talk about. As the Wal-Mart commercial says, "I'd put on a happy face."

When your husband returned home, he believed nothing had changed in him, but after a short period of time, both you and your husband began to realize something had changed. The typical veteran begins to show symptoms of PTSD 3 to 6 months after returning home. Anger, depression, hallucinations, and nightmares are just a few of the most common symptoms. Their brain is still wired for a war zone and has to use those neurological pathways to function in the real world. When he went to Iraq, your husband was faced with life and death situation, and there was trauma which forced him to rewire in order to survive. Now that he's home, there's no experience that forces his brain to rewire once more, this time in a way better suited for the civilian world. The fact of the matter is, PTSD is for life and your husband will likely remain hardwired for Iraq the rest of his life.

I'm aware of what my wife does for me and I know how difficult it can be on her. I'm also extremely appreciative of her just as I'm sure your husband is of you.
Thanks OVB for such a well written answer to my questions. It's hard for us spouses because sometimes our soldiers may not tell us anything in regards to how he feels, what happened, or anything remotely close to what you just wrote. Sometimes you just gotta look to others to explain what the hell is going on with your spouse! This post made me understand a little bit more and what a Veteran goes through as far as the PTSD process goes.....thank you for giving a response and I will most definitely not toss the letters!!! For other spouses, his blog is really interesting and one to definitely check out. I sometimes find that reading from a soldier's perspective helps me understand my Veteran that much more.
~Eternally Grateful,
Uncle Sam's Mistress

Posted by Uncle Sam's Mistress at 6:49 AM