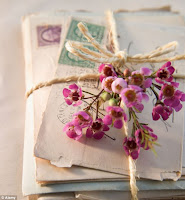 Kiss me goodbye and write me while I'm gone,
goodbye my sweetheart hello Vietnam~
Johnny Wright 1965

I was cleaning up a little today around the house, putting some "don't use that often" items up, and unpacking the last box from our move I just never got around to doing. Going through that box, I realized it held more personal items like wedding pictures, my husband's military album, and the letters he wrote to me from his entire deployment. Tied with a red ribbon, I reluctantly untied them and looked through that huge stack. While the kiddos were down for a nap, I sorted through them and placed them in order by date. I should have simply tied the ribbon back and gone on about my business, but I could not help myself.  I opened through them and read each one again.........

Some made me smile, some made me laugh...you have to understand my husband is from a small town in Virgina up in the mountains. Moved to Tennessee when he was old enough to be on his own, and been here ever since. He is a laid back soul with good old fashioned upbringing and a big heart. Although he has served almost 14 years now, he had never been overseas although he had been all over the United States. He wrote about camels, sunrises in the sand, and that no matter where he was....he would look at the stars and think that I was looking at them too on the other side of the world. He talked about coming home, and how he missed his soup beans and fried taters....how he really liked some of the younger guys under him, and some higher ups he didn't care for. Some letters asked for particular items for himself, or guys in his hooch. Two letters described the people in the villages, and how some families walked for miles just to bring that platoon lunch every day. That lunch usually consisted of lamb, hot tea, boiled eggs, fresh made bread. It was the first time he had ever eaten lamb. Each letter assuring me that he was ok, and that things were not bad just hotter than hell.

A bulk of the letters were mostly about our marriage, and how he missed his son who had just been three days old when his plane left for Iraq. He talked about our plans when he came home, and how he would not be who he was today if not for me. My husband is not an overly romantic person but occasionally he would surprise me. His little things he did were always good enough for me and the thought behind it. He always knew when I had a bad day, to swing by and pick up my favorite ice cream....or suddenly appear with a cold beer in hand when I needed it, without ever asking. Perhaps silly to some, but it's the thoughtfulness and the knowing how I am that I thought was romantic.

Of course, I wasn't ignorant of what was going on over there...the weeks that passed with no calls. Email wasn't an option, so it was letter or calls. I think the first three months of deployment, I was literally obsessed with the news, scanning every channel for any word or happenings across the Middle East. I have been on the other end of the phone when suddenly an "incoming" alarm would go off...other times, the connection was severed after I heard  a loud Kaboom! Then no word for days after that. Some of those letters I would re-read many times, some I went to bed with. No matter what I saw on the news or heard from other spouses, I guess I fooled myself into believing my husband and what he told me.

As the deployment went on, R&R came and went, we were nearing the end and counting down the days. I never saw any changes in his letters, or on the phone when he was able to call. I loved every bit of that "closeness" we shared while he was gone. I can really state now that deployment made me love my husband even more. Sometimes in marriage, you lose sight of one another and take things for granted. Deployment really showed us both what we had missed.

Now with him home...or my "pod' person as I call him, I wonder now were the letters just full of crap? It's obvious now the last six months of deployment when all hell broke loose over there, that he started having problems. The man who came home, I knew wasn't my husband. So who the hell wrote the letters? All these letters have left the whole family with nothing but empty promises...love and appreciation turned into anger and contempt for everyone around him. How does one write such thoughtfulness, love, and honesty and then come home with no feelings, emotions, or really even care anymore?

More importantly, were my letters not comforting enough to him? Did I fail in keeping him focused and in being supportive? Did my pen and words full of love not rescue my husband from suffering so? To me, looking at those letters, were almost like a love lost.....as if he never came home. It's been three years and maybe my heart has hardened somewhat but I wonder why I should keep these? I no longer have that person, don't even recognize the person who wrote these letters anymore......It's like keeping something from an old ex you had many years ago. You look at it, think back for a moment and realize that particular item really is not that important to you like it was when you saved it.

When does a spouse eventually come to terms that their soldier never is the same?
Posted by Uncle Sam's Mistress at 7:25 PM