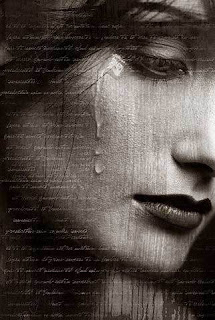 It's been sort of a rough week here. I am swimming in paperwork that I don't know much about, trying to figure our next move on the Social Security Disability denial/appeal and then Strep/Flu hit the house with full force on the little ones and myself. We have dealt with some issues of my husband's that have come like a small whirlwind and hit us unexpectedly, much of which has left me walking and stumbling blindly. A lot has happened in the past couple of weeks, and though I have shoved much under the rug over the last couple of years....seems like when we have a "spell" those old wounds open back up and man, do they bleed. Scars can be covered, eventually healing and fading....but when they keep being reopened...I don't think they ever truly heal.

The nasty sewage that spews forth from his mouth can be hurtful, the demands he places are not reasonable, paranoia can be so wrong and ludicrous that its almost laughable and there is no counterattack that I can launch to make him calm down. Some things he says, breaks my heart all over again. Just when I think I have things all pushed back inward and numbing myself once more, something happens and the past four years tumble out in one tangled mess breaking my already shattered heart into pieces. I end up going to bed and crying myself to sleep, or lying awake trying to sort out the mess in my head. I get so angry, so bitter, so damned resentful that I can barely stand to look at myself in the mirror some days. I am often ashamed of my own self....then, I am ashamed of him. Yes. There. I said it. Sometimes I am ashamed of him. I want him to be the man I loved, married and would have given the world to on a platter and that's gone. It didn't come back, it didn't come home in pieces..what was him is just dust in the wind that is scattered and lost forever. There are times where I get knocked to my knees so many times that I just can no longer stand. It's very hard to stand alone and then carry the weight of another constantly. It's not just my husband that I am carrying, but my children too. Lot of weight for one person that has been knocked down and buried many times.

I look back over the past years and think to myself  "Does he not understand all the things I have given up and done for him?" I go through all the hurdles, the challenges, the obstacles that would have made some of the fiercest military wives yell RETREAT and, then not understand where he thinks I am the enemy. I understand the battlefield came home with him, but I have spent the past four years this October trying to make that battlefield greener. I sheltered him from the world, although the world was beating me on the back. I protected him from fear, from hurting himself, and from hurting others even when I was hurting so badly myself. I sought him refuge, help, safety and stayed on the defensive for four years all while battling my own inner wars.

I gave up sleep to watch over him as he tossed and turned yelling to a dying soldier in dreams. I held him as he woke up covered in sweat and tears, soothing the panic and the pain. I gave him light when there was darkness, took his hand when he was lost, and led him in the right direction. When he was sick, I nursed him back to health. When he cried, I wiped away the tears. When he was sad, I made him laugh. I have given him everything he wanted and still, it doesn't seem good enough to him. I gave him the push up to be on top of the world, while all was left for me was to brush off the dirt and footprints. I never let him stumble, didn't let him fall, and I never will. I just wonder if he knows while doing it, I am barely keeping myself up in the process? There is nothing short of laying my life down for him I think, that would change his point of view of me being the enemy.

I am sick, alone, scared, and lost....and he turned me away. There is no outstretched hand, no friendship, no comfort, no light, no soothing...there is just absolutely nothing. My health isn't that great, and sometimes I panic because I wonder what if something happens to me, would my family be ok? I can't get any sicker because I have no one to care for me. I shouldn't have to panic when the doctors start talking about surgeries. It's not because I am scared, or worried of the reasons why I need it....its because who will help me? I often wonder if I should pass tomorrow....would he even miss me? Would he realize then how much he lost? Or would he simply fill my shoes with another replacement? I don't want anything but love in return. What happened to them over there that keeps them from loving back?

You'd think I'd have given up by now. I don't know where the strength to keep going is coming from. It's a war within myself to really decide. Is it love for him? Or is it simply the challenges that I needed as a woman and a person to accomplish? Is it the combination of both? Is it the fight for all of the Veterans coming home because I refuse to let my husband become a statistic on the VA number list? Was it because my parents raised me to be a fighter despite the fears and I learned to fight for what is right? There are days where I have the fuel, but not sure where I am driving to. This past two weeks has absolutely sucked me dry and left me weak. I just don't have the strength in me to fight anymore.

Another dear friend of mine mentioned that too many people complained and needed to focus on the positives more in our lives living with the wounded or just in general. I agree. She has jumped many hurdles in her years and for that I admire her deeply. She is one of my heroes and although I am older than her, I look up to her. I wish I had half of her courage, stamina and positive outlook. It hurt today to see how positivity works for her and so many others. God, I am seeking that for myself. It's not from my not looking or even creating it. It just simply isn't there. Everywhere I turn in my home, the military, and the battles with the VA leaves me with more negatives than positives. When I want to celebrate a positive, my husband finds the faults. When I have my hopes up, one entity of the government knocks me down again. The military lets me down or our government shuts it doors in my face. Some days I wake up and think the only positive thing I have right now is I am alive, and my children are loved, happy and taken care of. I don't have the support, most of the other wives don't understand what I am going through, and somehow....I don't really fit in anywhere. Again, those scars keep opening up.

I often laugh when people look at me funny when I say my husband's injuries include but not limited to PTSD and TBI. Most of them, sadly, don't even know what these issues are or care to know. The others always have this struggle to find the words to say something that sounds apologetic. You can see it in their faces as if they can't decide whether "I'm sorry" is good enough to say to me? In all though, you can see the look on their faces like "What the hell is that? Is it contagious? Is he going to end up on the six o'clock news by talking a Walmart by hostage? What do I say that sounds remotely endearing enough to her?" It's ok. I don't expect anyone to have the perfect words, don't really expect you to understand, and I don't want your sympathy. I just want you to be aware our soldiers never gave up on the war long after they come home and that we as families are silently fighting along side of them.

I am struggling with myself these days, and wondering how to be everything I am supposed to for everyone when I can't even be myself for just me. I know this too....shall pass. They say when you need help, ask. I have asked. I have done everything but plaster it on a billboard sign on the highway. They say take time for yourself, but they don't say how. They say seek counseling but there is none. This is my only therapy and I simply needed to get it off my chest this evening and then let it go. Maybe some other spouse or veteran will know exactly what I am talking about.


Blaming the Melancholy on the NyQuil,